Last week I did a joint presentation with Euan Wilcox, Regional Managing Partner from The Upper Storey (the digital agency that both Dell and Intel have been working with on Dell Swarm since the beginning) on the state of Group Buying and Social Commerce. The key highlight was discussing the next phase in the evolution of Dell Swarm, Dell's group buying e-commerce platform.

Originally conceived as an Intel and Dell joint marketing effort, Dell Swarm was launched in Singapore in May 2009. As a marketing tool, it generated a lot of buzz but it wasn't the commercial success Dell was looking for. It evolved again and was re-released in Canada and more recently Australia. Each time, the Dell Swarm platform has evolved and improved.

This year, Dell Swarm has just launched in the UK, is going into a new version in Australia and will be launched in Singapore, Malaysia and Brazil in the next 2 months, and in other countries like Japan and China later this year.

What is remarkable about this is that Dell Swarm is the world's first corporate group buying / deal of the day / social commerce platform developed by a fortune 500 company. It's an incredibly bold move by Dell. However, when you consider Dell's amazing heritage in e-commerce it doesn't seem as surprising. For example Dell was:
And now it is the first company to develop a group buying platform.

Here is a great video on how the Dell Swarm group buying platform works: http://vimeo.com/25024074. You can also find out more on Dell Swarm at: http://www.dellswarm.com/.

I'd love to hear your feedback on Dell Swarm as I'm globally leading the program (and I consider it my "baby"). Thanks!
Posted by Unknown at 21:55 2 comments:
Email ThisBlogThis!Share to TwitterShare to FacebookShare to Pinterest
Labels: Dell, Dell Swarm, Intel, The Upper Storey

The Rise of LinkedIn (Infographic)

Here's a great article (via Mashable) that presents a wonderful infographic (via OnlineMBA) on the rise of LinkedIn. LinkedIn recently passed 100 million users, meaning its population is bigger than most countries. But what kind of country would LinkedInLand be? An old, rich, well-educated one.

According to the infographic below, created by Online MBA, 68% of LinkedIn users are 35 or older, 74% have a college degree or better and 39% make more than $100,000 a year. As those stats illustrate, although LinkedIn may not have the buzz of Facebook or Twitter right now, it has an enviable demographic base. The company also is profitable, fast-growing and expanding into new lines of business like news aggregation. As LinkedIn prepares to go public this year, here’s an overview of the phenomenon that Reid Hoffman created 8 years ago.

Posted by Unknown at 10:25 No comments:
Email ThisBlogThis!Share to TwitterShare to FacebookShare to Pinterest
Labels: linkedin, social media

Here's a great infographic from CIC on the Chinese social media landscape. It's 2010 data and a lot has happened in a year but it's excellent for identifying trends and the big players. 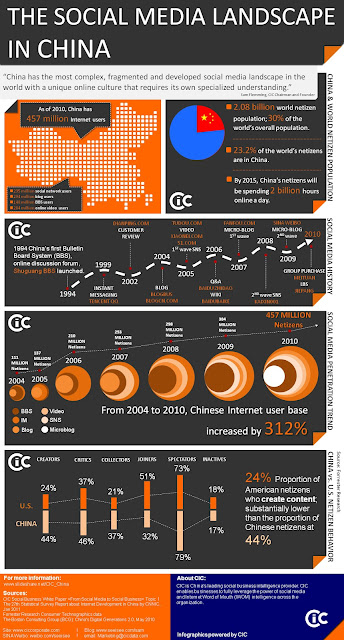