The original post by Adaline Lau appears on ClickZ Asia.

For a brand that went through Dell Hell five years ago, the American PC manufacturer has not only bounced back from its social media nightmare but has become one of the most well-known global case studies for making money on social media platforms.

Today, Dell earns US$15 million in revenue driving deals through @Delloutlet to its more than 1.57 million followers on Twitter.

The company also boasts a strong social media presence with more than 40 Facebook profiles worldwide, with thousands of staff representing the company on Twitter, and it has cracked the China market by becoming the most popular business brand in the country’s top social networking site RenRen with 800,000 fans.

Damien Cummings, online and social media director, Asia Pacific and Japan from Dell shared the company’s success in social media commercialization and marketing on the first day of SES HK 2011.
Cummings said a key social media strategy for Dell is content and listening and it is putting serious resources into doing that by setting up a Social Media Listening Command Center in Austin, Texas last year that now monitors around 25,000 conversations daily.

With Asia Pacific becoming an increasingly important region, particularly markets like India, Australia, China, and Japan, Dell has rolled out a mini version of the social media listening practice in India this month.

He said that the company is in the process of setting up a social media listening hub for Asia either in Singapore or Malaysia with a headcount of 10 staff comprising listeners, a leader that oversees analytics and CRM, as well as community managers that are trained in using social media for customer enquiry.

The Asia arm of the social media listening command center will also include presence in China that is scheduled to go live in the next six months.

Dell currently uses Radian 6 for social media monitoring and CIC in China but Cummings said they are considering local monitoring companies to fill the gaps for other Asia markets.

Social Commerce: Dell Swarm and Facebook Commerce
While Groupon and LivingSocial have converted many consumers to group buying, which is sometimes lumped into ‘social commerce’, this concept is not new for Dell.
The company launched a global pilot of the strategy in Singapore in May 2009, originally called the Dell–Intel Swarm. Since then, Dell rolled out an improved version in Canada, followed by Australia and is now live in the U.K. with plans to launch in other Asia markets such as China, Japan, and Southeast Asia.

Facebook commerce is an emerging platform that Dell is exploring. However, Cummings said he is “not putting big bets” on F-commerce because the social network is more of a platform to connect with friends than transactions so user-generated content such as ratings and reviews is key on the social site.

Training: Unleashing Employees as Social Media Advocates
Getting executive buy-in at Dell is not an issue since its founder and CEO Michael Dell is a big believer of social media. However, training 100,000 employees is no small feat. Not only does it involve human resource but a logistical challenge as well, which is now managed by a two-person team globally.

Within the company, employees have to undergo training from a specific curriculum before getting certification and so far 9,000 have graduated from the program.

“Having a social media policy in place is absolutely critical”, said Cummings, as the rights and responsibilities of each employee will be based around the policy.

Nonetheless, the internal training is by no means about producing ‘Dell robots’ but to keep to key principles such as protecting information, being transparent, responsible, and nice, having fun, and connecting.

Here’s what Cummings has to say:
“It starts with listening. You need to understand your customers. Many marketing driven campaigns are based on big ideas, forget that. You need to listen and identify key influencers”.

“Use your social media as a CRM platform. If you think about fans, likes, followers and connections that you are developing, think about how you develop an engagement plan. And treat them the same way you would treat direct mail/email because it’s exactly the same, you need to keep them interested and you need to keep getting the sales message out to them”.
Posted by Unknown at 20:00 No comments:
Email ThisBlogThis!Share to TwitterShare to FacebookShare to Pinterest
Labels: Dell, Dell Swarm, social media

Last week I spoke at the Campaign Spotlight: Technology event in Singapore. I presented on "How to get started and make money from social media" and presented Dell's case study on our social media success. I'm very pleased that I was rated the top speaker of the event (thank you to everyone who was there and participated). If you want a copy of the presentation please feel free to reach out to me: Twitter @damiencummings, LinkedIn: http://sg.linkedin.com/in/damiencummings.

Here are a couple of photos from the event too. 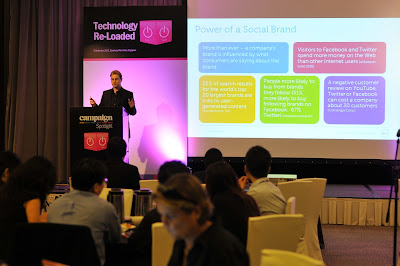 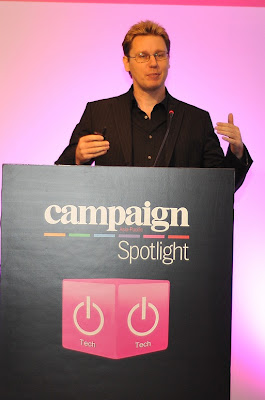 Social Media Lessons From The Corporate World For Medical Professionals.

It's been a while since I updated but I've got a whole load of things to add over the coming days - stay tuned!

Here's the complete, unedited and raw article for your reading pleasure.

Social Media Lessons From The Corporate World For Medical Professionals.


In my current role, a Social Media and Online leader across sales and marketing at Dell, I talk a lot about the commercial risks and opportunities that social media presents. On one hand, there’s a risk that employees could say the wrong thing – anything from inappropriate comments about or to customers, offensive remarks, inappropriate behaviour or even releasing confidential company information (often inadvertently but in the worst case scenario, deliberately). The opportunities however, hugely outweigh the negatives. Social media gives a commercial company fantastic, unmatched connection directly to customers. No longer are big companies faceless corporations. The real people within a brand can talk directly to customers – the guy who designs a product can have a meaningful conversation with customers who use it, feedback can be given directly to staff developing, managing or supporting a product and of course customers can talk to each other about their experiences in virtuous circle of positive feedback, real life tips on their experience and self-help when things go wrong.

When asked to look at the risk and benefits of social media for the Australian medical profession, much of this equally applies. There are great lessons from the world of business that can be of great benefits to patients and a real professional advantage for Australian doctors who have the courage to embrace these new opportunities early on.

Medical professionals face a dilemma in both engaging patients directly through social media and in managing social media platforms (like a Facebook page or Blog) where patients can meet and swap health information. Should you be too involved in a patient’s life? What if people come to the wrong conclusion about a medical procedure or diagnosis (made worse by the social media community validating that diagnosis, without actually ever seeing the patient)? And of course, there’s a challenge in maintaining the time required to “seed” content into these communities, directly respond to patient enquiries and maintain your Facebook, Twitter, LinkedIn (etc.) profiles.

Firstly, there’s a real opportunity to differentiate your practice and be seen as a medical thought leader because of your presence in social media. Successful Doctors spend an enormous amount of time networking, keeping up-to-date on the latest best practices in medicine and forging a name for themselves through word-of-mouth, media and patient referrals. Social media puts this into hyper drive and can turn a struggling practice of talented media professionals into a thriving business. Patients talk. Social media amplifies this talk in an unprecedented way.

Secondly, social media is fast becoming the preferred method for patients to understand their health and how to get the best treatment. Previously, I worked with a baby milk brand who was marketing their products directly to pregnant women in the early stages of pregnancy. Their entire customer relationship management and engagement plan was based around one key customer insight – in the early stages of pregnancy there is a large amount of doubt and risk. In those first three months of pregnancy, Mothers will not reach out to their families and friends but they will turn to strangers anonymously to understand if what they’re going through is normal, what they should expect and to understand what they should do next. Their strategy involved having women who have gone through pregnancy before managing their communities (Facebook, Twitter, Blogs, etc.), being available via Online Chat, as well as more traditional call centre/telephone. This remarkable strategy was the core pillar of their marketing and has built enormous loyalty (close to 90% of Mothers choose to stay with the first baby milk brand they choose. This is up to 4 - 5 years of brand loyalty).

How to get started:

The first thing you need to do is listen. Whether this simply look at medical or health forums or your own Facebook or Twitter profile, or all the way up to working with a specialist provider of social media listening services depends on how deeply you want to engage. At Dell, there are 25,000 daily conversations about the brand. We use a global software tool called Radian6 to monitor those conversations. It’s as simple as setting up “key words” in the web-based software. For Dell, its phrases like “Dell”, “Laptop” and “Alienware gaming laptop”. For medical professionals this could be anything from symptoms to medicines to medical procedures. The important thing is that you, or someone you trust, is listening. Then it’s a matter of thinking about your social media presence as an editorial calendar. Social media is not static – it’s constantly evolving and needs to be continually updated. If you’re setting up a Facebook profile for your medical practice, I advise you to have at least a 6 month editorial plan, as well as at least one daily update (4 – 12 updates per day would be ideal). And the most important thing is to really engage. Whether it be a simple acknowledgement of someone’s question, or publishing an in-depth research report or thought leadership article you’ve written, just get out there, start engaging and you’ll see tremendous benefits.
Posted by Unknown at 19:04 1 comment:
Email ThisBlogThis!Share to TwitterShare to FacebookShare to Pinterest
Labels: health, Magazine, medical, Medical Forum, MedicalforumWA, social media
Newer Posts Older Posts Home
Subscribe to: Posts (Atom)