What Type Of Social Media Ads Are The Most Effective?

Now that social networks devour about a fifth of Web users' time, you might be wondering which ad formats are most effective on Facebook and its rivals.

Well, among the seven most common formats, sponsored content ads -- in which consumers viewed a page that was "brought to you by" a leading brand -- were the most engaging, yet produced the least purchase intent, according to a new study conducted by research firm Psychster, and commissioned by cooking/recipe hub Allrecipes.com.

Corporate profiles on social-networking sites produced greater purchase intent and more recommendations when users could become a "fan," and add the logo to their own profiles, than when they could not.

Meanwhile, "give and get" widgets -- in which individuals can create and customize something (a car or a dinner menu) and then either send it to a friend ("give" widget) or keep it for themselves ("get" widget) -- were more engaging than traditional banner ads, but no more likely to produce an intent to purchase.

Psychster's conclusions held across brands -- a leading soup brand and a leading car brand -- and publishers -- on Allrecipes.com and on Facebook.com -- but like traditional ads, widgets had increased success if the brand was relevant to the Web site.

"From banner ads, to widgets and branded profiles, ad types differ in the cognitive, social, and motivational foundations that make them a success, as well as the time and cost to bring them to market," said David Evans Ph.D., CEO of Psychster.

Whereas other research often focuses on marketing spending or performance metrics, Psychster's study focused on consumers' attitudes toward different ad types and the brands they promoted.

For the study, Psychster designed a multivariate online experimental survey. Mockups were created of seven ad types, appearing on one of two publisher Web sites (Allrecipes, or Facebook), and promoting one of two brands (a leading soup brand and a leading car brand), for a total of 28 combinations.

To capture the interactive nature of the ads, a video was recorded showing the screen activity of someone interacting with the mockups, complete with a narration.

Overall, "No ad type was so engaging that it overcame the advantage found by matching the brand to the Web site," added Evans. "It is widely believed that ads are at an advantage when the brand relates to the site on which it appears ... Our findings replicated this effect, such that the soup brand performed better on Allrecipes than it did on Facebook."

What's more, every format was clearly perceived to be an ad. Although none of the ads fully "disguised" themselves, sponsored content scored lowest on this scale, but possibly at the expense of a strong call to action.

Although banners and newsletters were most likely to be seen as ads, they were among the best at triggering purchase intent and viral recommendations.
Posted by Unknown at 19:14 29 comments:
Email ThisBlogThis!Share to TwitterShare to FacebookShare to Pinterest
Labels: effectiveness, social media

Social Media Drives Business: 51% Of Customers Reached Via Twitter Are More Likely To Do Business With You

Here's a great infographic from DIYSEO. It states that 51% of people reached via Twitter are much more like to do business with your company/brand. The infographic also nicely demonstrates how social media is being used for demand generation activities for Small & Medium Business (SMBs).

Social Networking in Asia: No Longer a Niche Activity

For those people that still consider social networking a niche market, it’s time to wake up and face the data.

In June, 924 million Internet users around the globe visited a social networking site, making it one of the most popular online activities, and it just keeps growing. 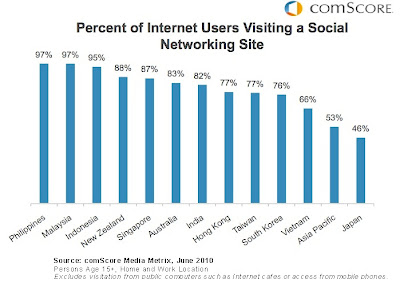 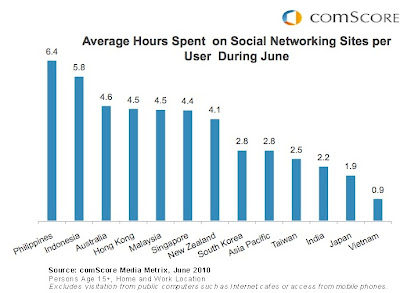 But wait, isn’t social networking just for kids and young people? No longer the case. What used to be an activity dominated by the 18-24 year old demographic is now a main activity in the digital lives of users across all age groups. In Singapore and Hong Kong for instance, more than half of social networkers are age 35 and older.
So now you have an idea of just how ‘non-niche’ social networking is, but what does this mean for you as a digital marketer? There are three ways to use social networks:

Word of Mouth Marketing
Social networks – as a matter of course – offer communication. Not just two-way communication between you and your customers, but between your brand and your brand advocates and your potential consumers. There are many case studies about successful word of mouth campaigns. That’s the beauty of social networks; if you create content that has intrinsic value and spurs interest in consumers to forward it on, or to retweet it, or to ‘like it’, it will take off with a life of its own. This is not easy and requires much research and creativity and, more likely than not, some failure.

Social Listening and Reputation Management
It is not enough to just put up a Facebook page or Twitter account. Many companies stop there and don’t dedicate full-time resources to read, update, and reply to all the activity that goes on. Social media engagement does not stop when the campaign stops. Your thousand of followers are still there and they are still commenting. In many cases, telling you what they think of your brand or your marketing campaign. You should listen and engage with these consumers – all the time. Whether it’s communicating with customers via Twitter.com, advertising on Facebook or offering special promotions on social media sites, if you aren’t commanding your brand in the social media realm you are missing opportunities to reach and engage with your audience.

Brand Marketing Campaigns
With over 75 percent reach in most Asia Pacific countries, social networks are now mass market media just like Yahoo, MSN, and other major portals. Branding is about reach (eyeballs) and frequency (the number of times these people are exposed to your message). If you have large cross media campaign to brand a new product or service, the social media is just as effective as the other main media. Just like other sites, it’s important to remember that each social media site offers brands and advertisers access to unique audiences. Many people are on more than one or two social networks for different reasons. Are you looking to reach women age 15-24 from a certain region in Malaysia? Are men age 55+ your key audience? Are you looking to reach social networkers that are also heavy users of online retail sites? Each social networking destination is unique in not only the utility it offers to its users, but also who these users are. Understanding audience characteristics from a demographic and behavioral level is integral to a sophisticated digital strategy.

Although still a niche market, one can assume mobile social networking won’t be for long.
Posted by Unknown at 00:30 2 comments:
Email ThisBlogThis!Share to TwitterShare to FacebookShare to Pinterest
Labels: asia, social media

As mobile phone penetration has risen to near-saturation and smartphones make up a bigger share of phones, the mobile internet is becoming a more powerful force for US consumers. But it will take more effort on the part of publishers for the mobile web to reach critical mass.

According to a June 2010 survey by web performance monitoring firm Gomez, a third of mobile internet users in the US say their most common problem when browsing the mobile web is site formatting. Slightly fewer complained of slow load times, and nearly a fifth said the worst problem was with functionality.

Mobile web users are used to some level of connectivity problems, but that doesn’t lessen their frustration when the goal of much mobile internet usage is quick, on-the-go access to information. Gomez found that while many users expect sites to load somewhat slower on their phones, nearly a third want to be able to access mobile sites at least as quickly as they can browse on a PC.

The US Federal Communications Commission found in May that just 33% of US smartphone owners were “very satisfied” with the speed of their mobile internet connections.

Some of these problems may be resolved when 4G becomes a reality for US consumers. However, publishers and marketers shouldn’t rely on carrier upgrades as a solution when they’ve had notorious problems with data transmission loads and infrastructure upgrades. Better mobile optimization will be key to marketing and communications with on-the-go consumers who will increasingly expect to access information anytime and anyplace—without waiting too long.
Posted by Unknown at 07:21 1 comment:
Email ThisBlogThis!Share to TwitterShare to FacebookShare to Pinterest
Labels: Mobile

At a recent roundtable event held by ValueClick Media, a topic that came up briefly was that of the danger of using blind networks to advertise, as this can result in display ads appearing alongside content that can be contradictory - or even damaging - to the brand or product.

Although this wasn’t the topic of the table, which was focused primarily upon the convergence and optimisation of online advertising, it got me thinking about the examples I’ve seen floating around the internet where poor placement has resulted in a cringeworthy visual. (Judging by where the majority of these ads have been seen, advertising on news sites can be a risky business...)

By my own admission, some of the examples I’ve pulled out have been around for a bit, and all are terribly tongue-in-cheek. So consider this a warning: If easily offended, don’t read any further. For those who can appreciate a bit of black humour and can understand the importance of carefully planned and placed media, read on. 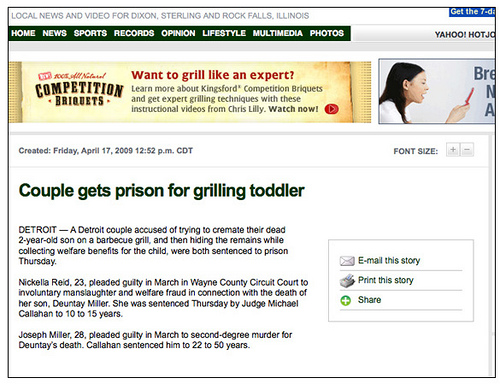 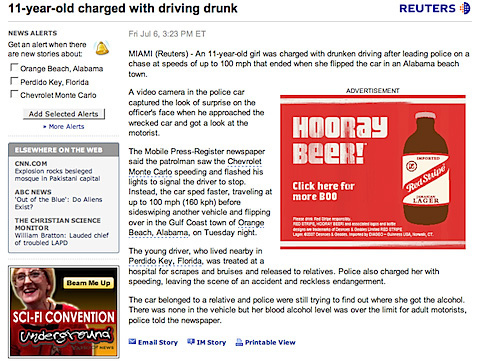 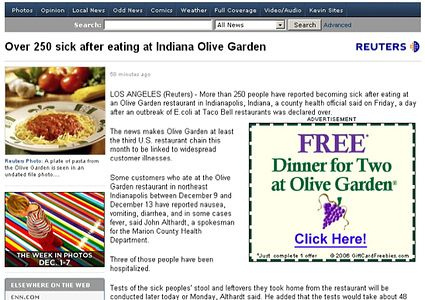 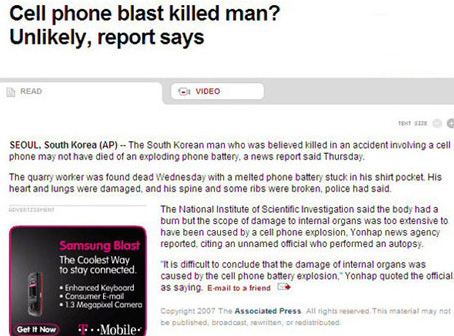 5. We've got you under our wing 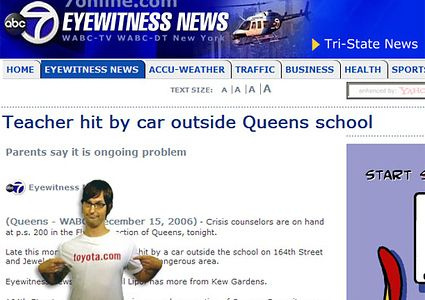 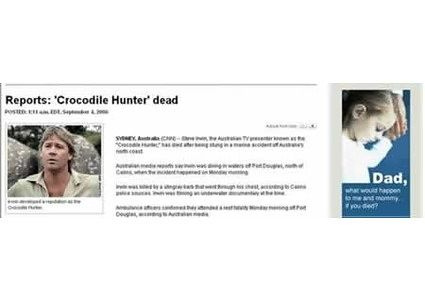 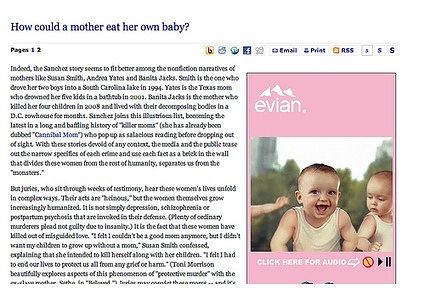 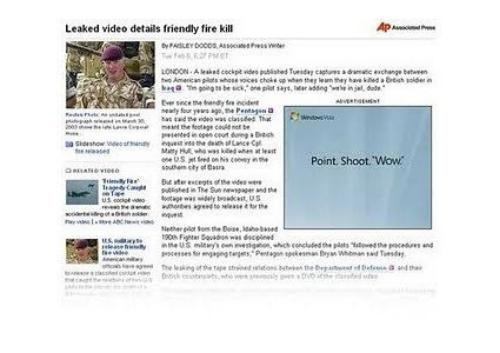 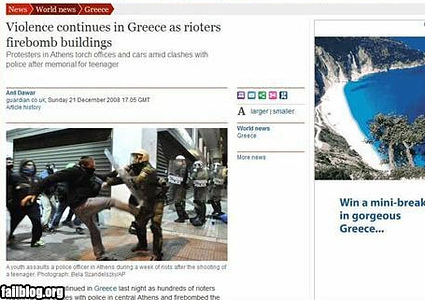