Video: The Next Digital Marketing Frontier

By Manny Rivas, Search Engine Watch, Apr 8, 2010
Video, as a marketing channel, has pushed its way into the hearts and minds of marketing agencies and businesses of most sizes. What's not to like? The numbers to quantify the shift speak for themselves.
The list goes on and on.

The State of Video Marketing at SES New York

Search Engine Strategies New York this year featured a keynote aptly named "Video: The Next Digital Marketing Frontier." The session focused on the latest developments in video marketing. The panel was moderated by Zach Rodgers, managing editor of ClickZ. He led the panelists in a conversation by asking insightful questions, ranging from video discovery and ad networks, to ad formats and the importance of engagement.

Before Rodgers jumped into directing questions, Terrence Kelleman, president/designer, Dynomighty Design, took the podium. His viral video and business success story is the type most marketers and businesses dream about.

The first video Dynomighty uploaded to YouTube was a product demo of his company's magnetic bracelet (one of many in-house product designs). It took off and was featured on the home page of YouTube, garnering 2.7 million views. Marketers take note!


In three months, that single video was responsible for $130,000 in sales. For Kelleman, the ability of video to tell an in-depth story of his product beyond a static picture and a buy button, gives video an unparalleled advantage. On the same note, video allows customers to become engaged (one of the major YouTube ranking factors), lending deeper insight into both brand and product.
Not all video marketing strategies focus on the proclivity of a video to become viral as the key to driving campaign success. It's damn cool when it happens, though.

Kelleman has used YouTube's ad platform for six months, and it has proven effective. Check out the solid ad placement too. 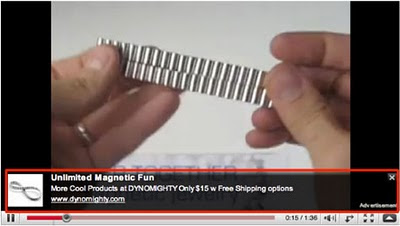 Baljeet Singh, senior product manager, Google, noted that although the platform is still pretty young, it has demonstrated results for all types of advertisers. If the idea is to ensure your content is in line-of-sight, it's a great channel tactic and it can be cheap as well.
Two Advertising Models
Singh agreed that YouTube has one model for small business owners and one model for large brands. Promoted videos can work for both small companies to large companies (e.g., GM).


Video Advertising
Ian Schafer, CEO, Deep Focus, believes people have tried to lend scale to online video advertising in the last couple of years. However, the same way that YouTube has millions of viewers, it's nearly impossible to reach everyone simultaneously.


The practice of placing ads over, around, or between videos has become a commodity. If your goal is to market in these areas, the opportunities have become available, defined, and standardized.
Schafer thinks video ads shouldn't be measured on a CTR basis. Similar to placing an ad on TV, you "won't necessarily get the same scalable result."

Online video captures the opportunity to provide deeper engagement. Video begets engagement and performance should be evaluated based on this metric as opposed to CTR.


Rachel Scotto, metrics strategy consultant, Sony Pictures, said that, in terms of metrics, "video stream" has been the focus for many, but it's not the most important.
What needs to be looked at:
Deeper Engagement


Scotto said if you're hosting the content, deeper engagement can be tracked through "tools you have control over." Because Kelleman hosts videos on YouTube, he gains deeper metric insights through YouTube's analytics package, Insight. He examines Hot Spots to give him an idea of where viewers are becoming disinterested and uses this information when moving forward and designing new videos. 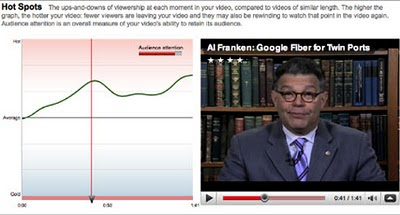 Video and Social Media: How Users Engage With Videos


Kelleman said Dynomighty has an intern whose role is to monitor and respond to video and channel comments. Schafer added that relevant social media buzz will lubricate distribution of content.
Important Social Media and Video Activity Metrics

Scotto said that volume metrics are the key if you're "shooting primarily for exposure." If you're after engagement, then you need to know how much of the video is being viewed. Video production costs are also important. You don't want costs to outweigh the benefit.


An increase in paid views will ultimately boost organic views. It's important to look at sources of views and determine where you're receiving the most lift. For example, with YouTube Promoted Videos, running ads on keywords that you rank well for can increase organic views.
One last tidbit: when running promoted video ads in YouTube, play the video from your channel rather than the watch page. This method can increase views for all of your uploaded videos because your content and brand personality will be in line-of-sight.
Posted by Unknown at 19:59
Email ThisBlogThis!Share to TwitterShare to FacebookShare to Pinterest
Labels: Search, video