Search and Rescue: How to Become Findable and Shareable in Social Media

Search isn’t an isolated experience. The act of looking for information is now fused with validation, which means the socialization of search will unite discovery with context and relationships. It all begins with where we purposely search for relevant content and also where we respond to interesting information that crosses our path.


ComScore’s most recent search engine ranking report offers new insight that will make us rethink how we publish content, increase its findability, and facilitate sharing.

In comparing February to January, Google remained on top with 65.4 percent of all core search activity. Yahoo followed with 17 percent and Microsoft ranked third with 11.3 percent.

Things become interesting when we analyze search queries as opposed to core search activity. The landscape broadens beyond traditional search.

Just behind Google, but ahead of Yahoo, YouTube ranks second for search inquiries overall. In 18th and 19th place, Facebook and MySpace also make appearances in the top 20 list respectively. Perhaps most intriguing is that neither Facebook nor MySpace offer true search functionality — but they still account for increasing search activity. Facebook is up 10 percent between January and February.

What does this all mean? As social networks gain in prominence, the amount of relevant information within each ecosystem increases in value and, as such, we deliberately seek content within the networks in which we engage.

It’s the Journey That’s Important, Not the Destination

Destination sites across the board are losing traffic and ultimately favor, simply because destinations are obsolete as intended or designed. The days of the traditional “start page” are coming to an end, only to be replaced with the “attention dashboard” — a dedicated application that aggregates the activity of those we follow in social networks into a series of digestible streams.

TweetDeck, PeopleBrowsr, Seesmic, HootSuite, Brizzly, and Facebook each represent a new generation of attention dashboards as they funnel social feeds into one clickable view. These streams look a lot like slot machines as information flies through dedicated columns, almost blurring the text beyond legibility. But this is where attention is focused and the content that appears within it represents the future of the information life cycle.

So how do we compete for attention if attention itself is learning how to adapt to a new media landscape?

Our job is to ensure that information travels outside of our domains and to the communities of interest in order to create a bridge back to our hub. And, content must adapt based on consumption and sharing patterns with our existing and potential stakeholders.

This is an important point and one that can’t be ignored. Social activity indicates that we are already moving away from the act of proactively traveling to traditional sites as a source of new content.

With the dawn of social media, the activity that brings social graphs and networks to life is quickly changing how we discover, learn and share and it is also forever reshaping the idea of online destinations as they exist today. It all comes down to attention and understanding where it’s focused and how it is tempted, lured, or distracted to click away from it.

The socialization of information is changing everything.

Connect with Attention Where Attention is Focused

Competing for attention is paramount. We lose most of the battles before they’re begun because we’re working against years of behavior that now represent the complete opposite of tomorrow’s consumption and sharing patterns.

Everything begins with identifying where attention is focused, combined with the new laws of attraction. 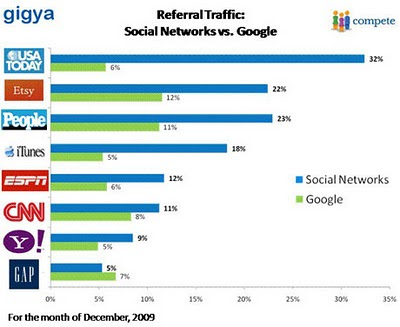 Peer-to-peer activity strongly influences the resulting behavior of impressionable nodes defining social graphs, much in the same way we rely upon trusted referrals from our real life contacts. The more something appears within the attention dashboard, the more likely it is that someone will click through. In addition, the more intriguing it seems, or the stronger the reaction it engenders among peers, also increases its enchantment and thus beguiling spectators to willfully lunge towards a shared experience, most likely triggering a public response that continues the social effect.

Social Architecture and Connecting the Dots

Information is already socializing and changing the behavior for how people search, find, react, and curate. The difference between our present and future is defined by the roads and bridges we build between relevance and prevalence.

As content producers, our responsibility is to connect information and stories to existing and potential stakeholders. It’s also essential to package and optimize our content as social objects in order for them to work for us in our absence, when individuals actively seek content through contextual searches.