Here is a great and "out of the box" viral concept. It really shows the power of Internet culture affects even the most mundane of things. However, the 3 Wolves howling at the Moon is pretty awesome. I'm definitely getting one!

The New York Times, Published: May 24, 2009
As the kind of guy who doesn’t need any particular item of apparel to get in touch with my inner animal spirit, I was skeptical when my friend Steve and his daughter Dorothy started enthusing about the Three Wolf Moon T-shirt and attendant Internet culture phenomenon. Yeah, right, I thought. 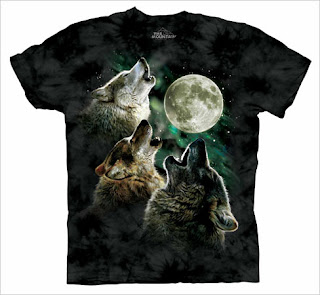 But ... after I put on the T-shirt, immediately grew back all the hair I’d lost decades ago and got a seven-figure contract to star in a kung fu romantic comedy along with Maria Sharapova and Scarlett Johansson, I had to admit I was wrong.

Brian Govern, a 32-year-old law student in Glassboro, N.J., had no idea what he had started when he wrote a similarly over-the-top review on Amazon.com of the T-shirt, which shows three wolves howling at the moon. Employing the snarky spirit of online humor, the review began:

“This item has wolves on it which makes it intrinsically sweet and worth 5 stars by itself, but once I tried it on, that’s when the magic happened.”

The magic, it turned out, was not so much the undeniably totemic power of the shirt, now endorsed by about 700 other similarly rapturous, if not entirely serious, reviewers, but the lesson in the inscrutable power of online culture that it provided. Like the butterfly wings creating the tornado, Mr. Govern inadvertently helped set off an almost impossible marketing bonanza and pop-culture craze: The shirt has been Amazon’s top-selling item of apparel every day since May 19, and it has morphed into one of those instant icons of Internet culture.

“This is something a lot of companies spend $100 million trying to do and for us it just happened, and we embraced it early on,” said Michael McGloin, an art school dropout and creative director of the Mountain, the New Hampshire-based company that made the shirt. The Mountain has gone from selling 2 or 3 of the shirts a day to 100 an hour on Amazon. “You could not dream of getting this worldwide notoriety for a T-shirt, but it became a viral visual,” Mr. McGloin said.

Mr. Govern, a student at the Rutgers School of Law in Camden, N.J., who hopes to go into intellectual property law, picked up on the shirt’s somewhat unfashionable, blue-collar appeal when he came across it on Amazon. (Note to commentators on patrol for liberal elitists — his politics are mostly conservative.) He reported that once he put the shirt on, women, apparently sensing some irresistible, brooding lone-wolf power, began flocking to him in droves. Just for wearing the shirt!

He concluded: “Pros: Fits my girthy frame, has wolves on it, attracts women.

“Cons: Only 3 wolves (could probably use a few more on the ‘guns’), cannot see wolves when sitting with arms crossed, wolves would have been better if they glowed in the dark.”

A few others chimed in over the coming months until the shirt and Mr. Govern’s comment were picked up first by a site called CollegeHumor.com in early May, then by Digg.com and others. Suddenly, everyone and his dog had a similar experience to share.

“When I opened the package, the focused radiance of the shirt actually burned my shadow onto the wall.”

“When I put this shirt on each morning I swear it vibrates like those fancy tooth brushes.”

“As soon as I put this shirt on the Bank called to apologize about trying to foreclose on my home.”

“I have been wearing this shirt for about 15 weeks and I have not needed to wash it! You don’t put this shirt on your torso you put it on your soul.”

Some had caveats — they attracted no supermodels, experienced major increases in body hair, thought the shirt would be better with one wolf and three moons. Wolves might seem like a guy thing but the T-shirt artist, Antonia Neshev, is a woman, as are some of the enthusiasts. One wrote that buying the shirt “was the best decision I’ve ever made, including the decisions I made to go to college, to marry my husband and to continue taking A.D.H.D. medication.”

Even if some of it is pretty un-P.C. toward the stereotypical wolf-shirt wearer (way too many references to meth labs, Chuck Norris and trailer parks), the communal commentary is like a new shared literary art form.

Mr. Govern, whose review has been rated as helpful by more than 7,000 Amazon readers, said he was not even aware of the online frenzy until an Amazon representative contacted him on Friday to see if he would talk about it. “I tell my parents and friends that it’s sad, but this is probably the most impact I’ll have on the world in my life,” he said.

Mr. McGloin says wolves are perennial best sellers, ahead of horses, tigers, dolphins, dragons, Celtic crosses and the rest, so the wolf spirit had the potential to go viral. Still, to move from parody to icon at such warp speed is stunning. A competing T-shirt seller, Zazzle.com, has already jumped in, promising a classy wolf shirt for refined tastes: “Have your wolf and eat it too with this modern take on a classic garment.”

On an understated black background, it reads:

The Moon.
Posted by Unknown at 19:39
Email ThisBlogThis!Share to TwitterShare to FacebookShare to Pinterest
Labels: 3 Wolves, Amazon, Viral, Wolf

Gotta get me one or two of those for sure.

The information given here is definitely relevant to my research Multicultural marketing and Global advertising agency so i would just like to thank you for posting the content as it matches my requirement.