We all know that content is king, but some companies are going to extraordinary lengths to finding the right content for their web properties. Demand Media is one such company - now using over 2,000 freelancers to produce over 100,000 pieces of content.

Start-Up's Algorithm for Success
By EMILY STEEL, WSJ.com, May 8th 2009.

There's no formula to make sure a sitcom, a magazine article or a movie will draw audiences, let alone ad dollars. Figuring out what to write or produce often comes down to a crapshoot.

Demand Media thinks it has come up with a solution for that age-old dilemma. The start-up, which has raised $355 million since its inception in 2006 and is run by former MySpace Chairman Richard Rosenblatt, has spent the past three years refining a set of algorithms that it uses as a guide for mass-producing content that it publishes on its many Web properties.

The result is a network of 2,000 freelancers who create 100,000 pieces of niche content a month. These range from a video about diet tips for parakeets, featured on Demand Media's instructional site eHow.com, to an article about three ways to identify triggers for spikes in blood pressure on its site Livestrong.com, a partnership with the Lance Armstrong Foundation.

"We are taking splinters of content and bundling them together. That bundle of sticks is quite valuable," says Mr. Rosenblatt, who ran MySpace's parent company, Intermix Media, and negotiated its sale to News Corp. (News Corp. also owns Dow Jones, publisher of The Wall Street Journal.) 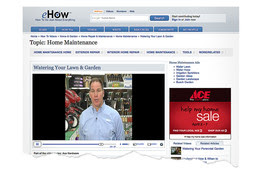 
Demand Media is one of several companies, from start-ups like Associated Content and Howcast to portals like Time Warner's AOL, that are trying to develop cheaper models for creating and distributing content online. It is the 30th-largest Web property in the U.S., with 25.9 million unique visitors in March, according to comScore.

Now, Demand Media's business model and its ability to attract ad dollars from major marketers is being put to the test as it starts selling the idea to Madison Avenue.

The system spits out tens of thousands of title suggestions for articles and videos. These titles are sent to a reserve where the company's network of freelancers looks for available assignments. The freelancer writes the story or produces the video, then it's sent through a system to check for plagiarism and edited by a copy editor. After a separate editorial team approves the article, it's published on a Demand Media site and syndicated across other Web sites. Freelancers are paid about $20 per article or video.

Demand Media has been relying on third-party ad networks to broker most of the ads on its sites and has a revenue-sharing agreement with other sites where it syndicates its content, such as Google's YouTube. The company says it has been profitable since inception, thanks to ad revenues generated on its portfolio of more than a million generic domain names.

Instead of selling standard online ads, Demand Media is selling integrated sponsorships of its sites, as illustrated by a recent campaign for Ace Hardware on eHow.com, in which Ace sponsored the Home & Garden section of the site, which featured Ace-created how-to guides and videos.

Other ad executives question whether Demand Media's model is polluting search results with articles from unfamiliar sources. "It seems like you are backfilling search results with content after the fact versus being an organically created, legitimate or interesting source of content beforehand," says Tim Hanlon at VivaKi Ventures, a digital marketing unit owned by Publicis Groupe.

To address editorial concerns, Demand Media puts its content through a series of screenings, Mr. Rosenblatt says.
Posted by Unknown at 19:46
Email ThisBlogThis!Share to TwitterShare to FacebookShare to Pinterest
Labels: Content, Demand, Media

Online ethnic advertising is a unique solution that we provide. We combine our Internet marketing knowledge with ethnic advertising expertise, offering solutions for advertisers wanting to reach ethnic minority consumers. To know more about Ethnic Advertising and South Asian Marketing visit our site.