Newspaper Web sites saw a big increase in online video viewing in the second quarter of 2010 -- partly due to interest in the oil spill in the Gulf of Mexico, according to Brightcove and TubeMogul, which analyzed viewership on roughly 2,000 news and entertainment Web sites representing 3.4 billion video streams. 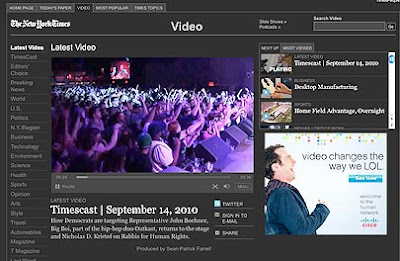 Brightcove and TubeMogul also conducted a survey of brand managers concerning their use of online video as a marketing and advertising platform. Sixty percent of those surveyed said they are planning to spend more on online video over the next year, while 70% said they plan to add mobile video to their marketing strategies in this period.

Turning to objectives, 65% said the primary focus of their online video campaigns is awareness, followed by lead generation at 21% and e-commerce at 12%.
The companies also found that referral traffic to online videos originating from Facebook and Twitter is growing faster than traffic from traditional search engines. In fact, if the current growth rate is maintained, Facebook will surpass Yahoo as an originating source of online video referrals.

What's more, referrals from Facebook and Twitter tend to be more engaged with the video content once they arrive than traffic from other sources -- at least when the destination site is a TV or music entertainment Web site.
Posted by Unknown at 18:44
Email ThisBlogThis!Share to TwitterShare to FacebookShare to Pinterest
Labels: newspaper, video, website