Social Networks, Blogs and Games Dominate US as Email Declines.

CommentIn a big shift from just a few years ago, Americans spend nearly a quarter of their time on social networking sites and blogs, according to released today by The Nielsen Company. 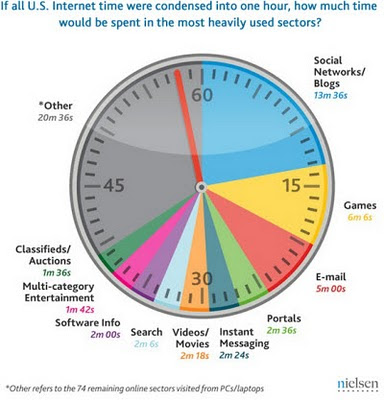 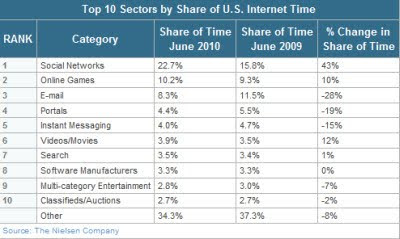 Americans spend about a third of their online time communicating and networking across social networks, blogs, personal email and instant messaging.

“Despite the almost unlimited nature of what you can do on the web, 40 percent of U.S. online time is spent on just three activities – social networking, playing games and emailing, leaving a whole lot of other sectors fighting for a declining share of the online pie,” said Nielsen analyst Dave Martin.

It’s worth nothing that online games overtook personal email in the past year, moving into second place behind social networks. Online video and movies also saw significant growth, now at 3.9 percent compared to 3.5 percent a year ago. During June, more than 10 billion videos were streamed to web users in the U.S. On average, Americans spend 3 hours and 15 minutes per month watching online video. 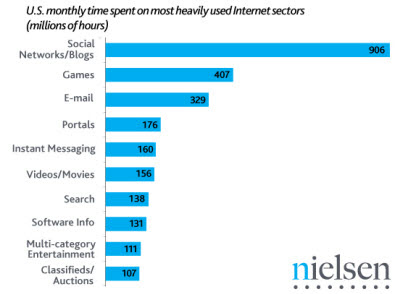 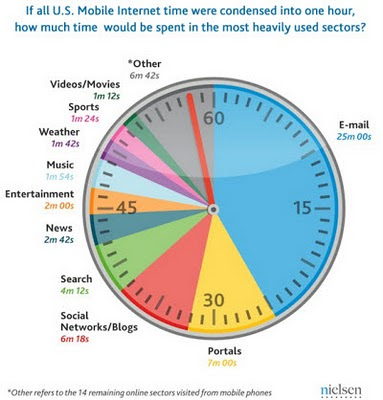 Music and video/movies saw 20 percent increases on mobile during the year. But news/current events and sports sites saw more than 20 percent drops. Oddly enough, there was no separate section for games, and entertainment was a fairly small part of the overall pie.
Posted by Unknown at 23:16
Email ThisBlogThis!Share to TwitterShare to FacebookShare to Pinterest
Labels: blog, email, games, internet, online, social media