It was inevitable. Google are now offering search-based advertising that leads customers to content on Twitter. The service is running on Google and a number of social media partners and is an interesting experiment in whether Twitter Followers can be commercialised, or in fact have any real value in generating sales.

NEW YORK (AdAge.com) -- Twitter may still be tweaking its own business model, but Google has found a way to use the popular microblogging service to sell ads. 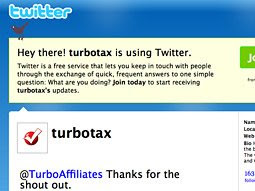 The search giant has started offering marketers ad units that stream their five most recent "tweets" across the Google AdSense network. The first marketer to use the ad units is Intuit, whose TurboTax brand is trying to boost its Twitter followers. Intuit used several of the measures available for any AdSense campaign to target the ads, which are running on sites such as Bebo, Facebook, Hi5, MySpace and Alltop.

"It's syndicating whatever the team that works on the TurboTax Twitter account [@turbotax] posts," said Seth Greenberg, director of marketing at Intuit. When a user clicks on an ad it takes them not to TurboTax.com but to twitter.com/turbotax.

'Conversational vehicle'
The deal with Google also expands the audience for TurboTax's Twitter presence as the ads are syndicated it across the web. After all, while Twitter is growing and had about 7 million unique visitors in February, Nielsen NetView pegs the active digital media universe as 167 million people.

"We could have used this as an acquisition vehicle, but we're looking at it more like a conversational vehicle," Mr. Greenberg said. We're measuring this [in part by] how many followers can we get. Can we get to 100,000 by allowing people to know we're a resource? We're not going to hard sell you on the product, but we want people to know there are lots of people here who can help answer your questions."

The ability to put real-time feeds and data into ad units has existed for years, but one of the technological limitations of this particular execution was that users can't actually click on links that are included in the "tweets," or posts by users. Right now, the feed only pulls from TurboTax's Twitter account, rather than pulling a stream of tweets that mention the brand or tax-related issues. A Google spokesman said it is doing "limited" tests with a "small number of advertisers and publishers."

Not exactly a new concept
The concept of aggregating tweets and syndicating them on web pages isn't new, either, although it's more commonly seen on an individual's blog or other content-based websites than it is within paid-media placements. There are several widgets, blogging tools and independent third-party apps that can be placed on a website or blog to stream tweets organized by user, hashtag or keyword. Earlier this week, Glam Media launched an offering called Tinker.com, which lets advertisers buy ads around events or conversations. For examples, a retailer could buy all Twitter conversations around the Oscars, and those Twitter conversations -- along with the ad -- would show up on sites Glam Publisher Network.

The TurboTax ads are running during the last two weeks of tax season -- crunch time for tax-prep marketers. According to TNS Media Intelligence, Intuit's tax brand spends more than $100 million in 10 weeks. Intuit did not disclose how much it spent on this particular buy or whether the unit was sold at a premium ad rate.

TurboTax spokeswoman Colleen Gatlin mans the Twitter account, along with her public-relations team and Christine Morrison, social-marketing manager at the company. She considers them "enablers" -- they get people's questions to the folks who can provide answers. There are many reasons why the company is on Twitter, she said, but one big reason is that the microblogging site humanizes the brand.

Network effect
"We're raising awareness in the social community that we're here helping consumers," she said. "We make changes based on customer feedback, we're learning about the process."

Mr. Greenberg said he's still trying to work out exactly what a Twitter follower is worth from a marketing point of view, such as whether people have a greater propensity to become a customer when they're following a brand on Twitter or how valuable those customers are. But he's sure one of the advantages to the tool is its network effect.

"We're doing research about people who engage with us but also more interesting are their friends and followers," he said. "People can influence others in their own networks."
Posted by Unknown at 17:19
Email ThisBlogThis!Share to TwitterShare to FacebookShare to Pinterest